Aggressive love or passive aggression
My devotion or destruction
My prerogative 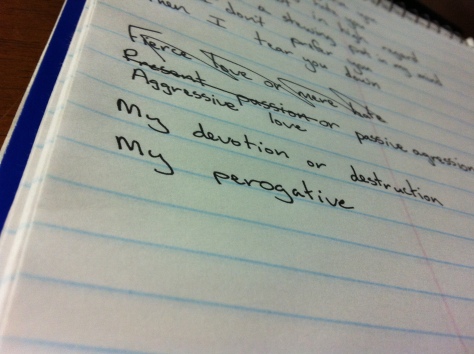 I wish I could write a war

And win it with a word

And shake the earth

Until all the silt is sifted away

You can depend on me

To pen and pray these prayers

With every word I write

Tonight I went to my second Murfreesboro Writers’ Group meeting. The first time I went, I read a song I recently wrote while on a plane ride. It was called “Fragmented Patches.” Maybe I’ll post it later. I don’t know. Do you want to read it?

I joined the writers’ group for a few reasons. I want to meet new people. I work at home so I have a limited workplace sphere of influence. Through this group, I can influence people. I haven’t been writing very much and I wanted motivation to start again. I have nothing else to do on the second and fourth Wednesday of every month. I used to have Life Group that night, but ours now meets on the second and fourth Sundays of the month.

This writers’ group is a HUGE witnessing opportunity. Huge. Huge. As you’re surely aware, writing is a deeply personal activity. Writers write what they feel. And, if they claim to have no feelings, they make up characters who have the feelings the writer is denying.

What you may or may not know about writers is that they generally value each other’s work highly. For example, this particular writers’ group is for constructive criticism only. There is no tearing down of work, thought or concepts. There are many compliments. Several people are impressed by other people. A lot of the attendees in this group are writing novels and short stories. I am mostly focusing on poetry. When I read a poem, some of the writers have no concept of how to construct a poem. They are in awe of the entire poetry genre. To them, it’s a terribly interesting thing that they like but don’t know how to do.

I am a Christian. My life is Christ. Naturally, I write about Jesus/God/the Holy Spirit/worship. Some of these folks “aren’t religious.” Those are their words, not mine. But they are intrigued by the things I’ve written and shared. They find what I say interesting and eloquent.

That’s good, because I prayed they would. I asked God to soften their hearts and make them receptive to the Truth that I’ll deliver. I also asked Him to protect me from any harmful subject matter that the other writers detail.

My first week, I read the part of a flirty, vampire girl. That’s so not my life. But this lady was writing a play and she needed people to read the lines. That was the part I was given.

And to that spattering of ideas and fantasies, it’s my task to bring Jesus.

I must be intentional with the stuff I present. I have a captive audience. Literally. In two ways. One, they are captive and must pay attention to what I say. Two, they are captives, bound in the lies of the enemy. With the truth that I share through my poems/songs/potential novels, I will hope they see freedom. And, in turn, desire to grasp that freedom.

So, if you’re reading this and you believe in Jesus, please pray for me. I have a unique and powerful opportunity. I’m very excited. I like being spurred to write again, too. It’s such a catharsis for me. I get a little giddy thinking about the possibilities of the words that will come out.

I don’t recall our last paper conversation
I expect you’re the same
Melancholy, lost in yourself and a little down
It’s me that’s changed
Truth introduced itself and began courting me
We’re together now
I suppose you’re disappointed
Who will you complain to in your dreary dispositions?
Not me, I celebrate
Now that you know this you’ll move on
Slowly at first
Until you find someone new stuck in their old ways
You’ll seduce them subtly
They’ll believe they’ve found an outlet to freedom
Only to discover later they were captive
After being captivated by your drowning lust
As for me, I’ve taken to listening
Instead of expressing so much
It’s refreshing hearing someone else’s voice
Other than mine
I’m not alone now
Though I was when you were with me

Life musings about faith, family, friends, writing and photography, plus much more